Emile Gaboriau has often been dubbed the founding father of the modern detective novel. 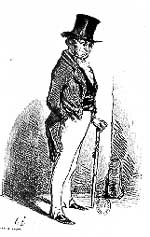 There were other precursors in the genre: Edgar Allan Poe's Chevalier Dupin made his first appearance in The Murders in the Rue Morgue in 1841.

Honoré de Balzac's Comedie Humaine novels introduced the notorious Vautrin in Le Père Goriot in 1834 -- Vautrin was a character inspired by the real-life Vidocq, a former convict who rose to become head of the French Surete, before opening the world's first detective agency. Vidocq's Memoirs were an influence on Poe's Dupin.

Alexandre Dumas created the character of Monsieur Jackal, the mysterious head of the Paris Surete, in his novel Les Mohicans de Paris (1854-59) -- the title of which was obviously borrowed from Fenimore Cooper.

Victor-Alexis Ponson du Terrail, the author of the saga of Rocambole (aka Les Drames de Paris), comprising twenty-five volumes published between 1857 and 1867, mixed all these elements together, adding the character of a superhumanly gifted hero born to challenge the forces of evil -- one that had, in fact, began his career on the side of evil!

But Emile Gaboriau was the first to invent the character of the procedural detective, and place him in the context of a novel where the resolution of a murder, not the rescue of an inheritance, a treasure, or some kind of grandiosely mad evil scheme, was at the core of the book.

Monsieur Lecoq (no first-name was ever given by Gaboriau) is an agent of the dreaded French Sureté. He is a methodical, scientifically minded detective who, like Sherlock Holmes, carefully gathers minute clues from the scene of the crime and, from them, draws logical conclusions which, at first, amaze his colleagues but prove eminently rational when explained.

Sir Arthur Conan Doyle paid homage to Gaboriau when he first introduced Holmes and, indeed, Monsieur Lecoq is a worthy precursor of the Great Detective, who owes him more than a passing debt. Like Holmes, Lecoq is more than a mere crime-solver: he is a master of disguise with a secret identity in the Paris underworld.

In the person of armchair detective Tabaret, nicknamed Père Tireauclair, i.e,: Father Bringer of Light, a title Lecoq himself will eventually inherit, Lecoq even has an older mentor who, like Mycroft Holmes, helps him solve particularly challenging puzzles from the comfort of his bed.

Monsieur Lecoq first appeared as a supporting character, a student of the methods of Tabaret in L'Affaire Lerouge (The Lerouge Affair), published in 1866, but taking place in 1862.

He then graduated to the status of full-blown "hero" in Le Crime d'Orcival (The Orcival Crime), published in 1867, but taking place in 1863.

The newspaper serializing Lecoq's adventures saw its sales skyrocket, which encouraged Gaboriau to write the classic Le Dossier No.113 (File 113), also in 1867, but taking place a year earlier, in 1864, and then, Les Esclaves de Paris (The Slaves of Paris), published in 1868, taking place in 1867. Lecoq retired from the Surete soon after.

Finally, in 1869, Gaboriau wrote Monsieur Lecoq, which told the story of Lecoq's first case, back in 1859.

A sixth volume, La Vieillesse de Monsieur Lecoq (Mr. Lecoq's Old Age), was written by another popular mystery writer, Fortuné de Boisgobey, in 1878. It takes place in 1877. This novel anticipates the modern publishing phenomenon of Sherlock Holmes pastiches. In it, Lecoq pretends to be older than he really is -- he would only be in his late 40ies -- but that is an illusion carefully cultivated because of his extra-curricular activities (see below).

Finally, La Fille de M. Lecoq (Mr. Lecoq's Daughter) was published in 1886 by & William Busnach & Henri Chabrillat. The story takes place in the Batignolles and starts with the murder of Lecoq who has retired and is living under the name of Muret. His dying words are "Three, the Three!". Lecoq's daughter has to consult his hidden memoirs to solve his murder.

- an "offstage" appearance by Lecoq, advising another character in the Gaboriau short story "Une Disparition" (A Disappearance), taking place sometimes in the 1870s,

- a 1908 pulp magazine La Fée au Vitriol (The Vitriol Fairy) purported to be the memoirs of Lecoq's son Lucien, who also became a policeman and is now 57,

- and a 1952 pastiche novella by J. Kéry: Le Dernier Dossier de M. Lecoq (Mr. Lecoq's Last File), included with M. Frémond a disparu, a Simenon pastiche, which I have not read.


4. A TENTATIVE TIMELINE OF THE LECOQ FAMILY...

1795 (Dec 13) - Albert Lecoq is at Wold Newton (according to Philip José Farmer); he is a member of the High Council of the Black Coats. He has a honest merchant brother in Caen, Normandy, Lambert Lecoq. At this time the High Council includes an unnamed beautiful woman whom I identified as Anne de Breuil, descendent of the notorious "Milady".

Also in 1803, seven members of the High Council of the Black Coats scheme to remove Colonel Bozzo-Corona at the Convent of La Merci; they are executed (as per Salem Street) (this could have also taken place in 1807 as per The Invisible Weapon). Albert Lecoq was amongst them. Subsequently, Anne dumps the two children (Antoine and Leo) on their honest merchant uncle Lambert in Caen, Normandy.

1821 - After relocating its operations to France, the Colonel is briefly imprisoned in Caen, Normandy (as per The Parisian Jungle). There, he meets Leo who by now is 18 and recruits him in the Black Coats. His older brother Antoine remains in Caen and works honestly for his uncle Lambert.

1822 - Leo is caught by the police, sent first to La Force jail (as per the 1908 Anonymous Pulp Mag), then to the Toulon Hard Labor Camp where he picks up the nickname of Toulonnais L'Amitié. The Anonymous Pulp Magazine claims that he was arrested because of his Bonapartist sentiments; but this is, likely a cover-up.

1823 - Vidocq spots Leo Lecoq's potential, releases him from Toulon and hires him for his Sûreté brigade (as per the 1908 Anonymous Pulp Magazine); the Colonel puts him on the High Council of the Black Coats; Leo's connection with the Sûreté is established in Salem Street.

1825 - Events of THE PARISIAN JUNGLE 1. Leo/Lecoq de la Perière/Toulonnais L'Amitié frames André Maynotte in Caen, Normandy; he stays in touch with his brother Antoine who has since inherited the shop upon Lambert's death (JML). 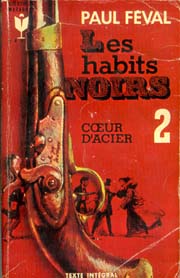 1827 - Marguerite Sadoulas, age 15, runs away from school with her piano teacher (ás per Heart of Steel); she meets Leo, has an affair, is recruited in the Black Coats.

1828 - Leo and Marguerite have a son: he is the future Monsieur Lecoq from Gaboriau; I'll call him "Victor". Leo entrusts baby Victor to his childless brother Antoine, to be raised in Caen. This is based on contradictory information given by Gaboriau, which makes it possible for Monsieur Lecoq to have been born any time between 1828 and 1834. Gaboriau further states that his Lecoq is the son of a rich and honorable family from Normandy.

1842 - Events of THE PARISIAN JUNGLE 2. Death of Leo Lecoq de la Perière aka Toulonnais L'Amitié at the hands of André Maynotte; Beginning of the decline of the Black Coats.

1845 - Monsieur (Victor) Lecoq, age 17, meets Marguerite Loudet, the widow of one of his father Leo's Sûreté colleagues (as per the 1908 Anonymous Pulp Mag).

1846 - Monsieur Lecoq and Marguerite Loudet have one son, Constant Lecoq (as per the 1908 Anonymous Pulp Mag).

1848 - Monsieur Lecoq and Marguerite Loudet have one daughter, Jeanne (as per the 1908 Anonymous Pulp Mag). Antoine and his unnamed wife die suddenly. Gaboriau tells is that Lecoq was embarking on the career of a law student in Paris, when he abruptly learned that his father, ruined, had died, soon followed by his mother. These events might be the result of a vengeance of the remaining Black Coats or an attempt to kill Leo's presumptive heir? Monsieur Lecoq then leaves the University and becomes secretary to Baron Moser. According to Fortuné de Boisgobey, he meets the "Gentilly woman" Jeanne Roussel née Ballmeyer.

1849 - Monsieur Lecoq and Jeanne Roussel have one son, Louis (later Louis Lecoq de Gentilly); the baby is sent to UK (as per de Boisgobey).

1850 - Monsieur Lecoq and Jeanne Roussel have a second son, Jean (the future criminal Ballmeyer); the baby is sent to the US.

1852 - The events of THE CADET GANG; dramatic changes in the High Council of the Black Coats, etc.

1853 - Monsieur Lecoq leaves Baron Moser's service; he is recruited by Marguerite Sadoulas and becomes a criminal; this leads to Marguerite's death?

1862 - Events of L'AFFAIRE LEROUGE. Monsieur Lecoq begins his affair with Palmyre Chocareille aka Nina Gypsy. Any children remain to be discovered.

1870 - Battle of Sedan. Lucien Lecoq, age 19, is taken prisoner by the Germans, then escape (as per the 1908 Anonymous Pulp Mag). Louis Lecoq de Gentilly is in Heidelberg.

1878 - Louis Lecoq de Gentilly and Therese Lecomte have a daughter. Presumed death of Monsieur Lecoq on May 1, opening day of the Universal Expo (as per the 1908 Anonymous Pulp Mag). In reality, Lecoq goes on to live in hiding in the Batignolles under the name of Muret (as per Busnach/Chabrillat).

1905 - Death of Jean Roussel Ballmeyer (Leroux's PERFUME OF THE WOMAN IN BLACK).


(FOR MORE ON THIS TOPIC, SEE LES HABITS NOIRS AND OUR ARTICLES ON THE CONSPIRACY, ROULETABILLE AND THE TANGLED WEB.)

[Thanks to Rick Lai, whose extraordinary research was invaluable in assembling this article, and Bevis Benneworth and Thierry Chevrier for added information.]